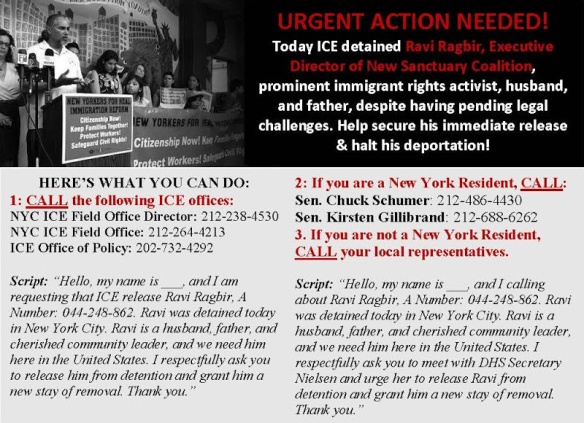 Ravi Ragbir was detained today by ICE during a regular check-in appointment.

We need your help to secure his release & halt his deportation.

Here are ways you can help us secure Ravi’s immediate release:

You can use the following script: “Hi, my name is ___________, and I am calling to request that ICE release Ravi Ragbir, A Number: 044-248-862. Ravi was detained today in New York City. Ravi is a husband, father, and a cherished community leader, and we need him here in the United States. I respectfully ask you to release him from detention and grant him a new stay of removal. Thank you.”

Script: “Hello, my name is ___, and I calling about Ravi Ragbir, A Number: 044-248-862. Ravi was detained today in New York City. Ravi is a husband, father, and cherished community leader, and we need him here in the United States. I respectfully ask you to meet with DHS Secretary Nielsen and urge her to release Ravi from detention and grant him a new stay of removal. Thank you.”

3.        SHARE the below image widely on social media using #IStandWithRavi 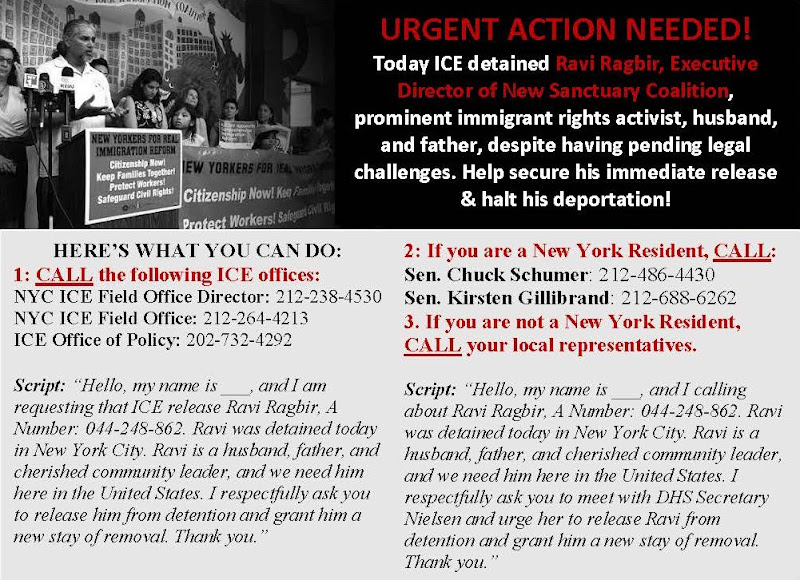 Ravi is a husband, father, and nationally-recognized immigrant rights activist who lives in Brooklyn, New York. The Executive Director of the New Sanctuary Coalition of New York City, Ravi works with congregations, schools, community organizations, and legal service providers to ensure that immigrants do not have to go through the immigration system alone. He is a tireless advocate for immigrant rights, working with local and national leaders to ensure just immigration policies. For his outstanding contributions to the community, Ravi was recently awarded the 2017 Immigrant Excellence Award by the New York State Association of Black and Puerto Rican Legislators and the 2017 ChangeMaker Award by South Asian Americans Leading Together. Ravi is married to Amy Gottlieb, an immigrant rights leader herself with the American Friends Service Committee, and is a caring father to his 22-year old daughter.

Ravi’s leadership and compassion stem from his own experience in the immigration and criminal legal systems. Ravi came to the United States from Trinidad and Tobago, receiving lawful permanent residency in 1994. His daughter was born the next year, 1995. While working as a salesperson for a now-defunct loan company to support his family, Ravi met an individual who was later convicted of submitting fraudulent loan applications to the company. Ravi was also charged in connection with this offense, and although Ravi took his case to trial, he was convicted. After completing his sentence, Ravi was detained and placed in removal proceedings in 2006. His conviction was deemed an “aggravated felony,” preventing the immigration judge from considering  his positive equities–including his family and community support–or releasing him from detention. In detention, Ravi met countless other individuals who, like him, had been separated from their families without the opportunity to seek discretion from an immigration judge. When Ravi was eventually released from detention in 2008, he returned to his family and immediately began helping other immigrants facing deportation and detention. His energetic work supporting immigrants and their families has continued to expand over the past decade, as Ravi has become a central pillar of the New York immigrant community. It is critical that Ravi be allowed to remain in the United States, not only to keep his family united, but also so that he may continue this profoundly important and selfless work in the service of others.