On January 13, 2021, the New Sanctuary Coalition, the Immigrant Rights Clinic at NYU School of Law, the National Immigrant Justice Center, Migrant Justice, and the Immigrant Justice Network held a panel discussion with targeted leaders of the immigrant rights movement. Clinic students also presented an interactive map highlighting the breadth of the government’s campaign to silence immigrant leaders. With the Biden Administration soon to take office, this moment calls for a public reckoning of our country’s immigration policy. Immigrant voices must be protected and centered in this conversation. The briefing addressed what members of Congress can do to defend and prevent further retaliation against the rights of their constituents and members of the immigrant community.

Also see the English-language transcript here. [Spanish version is in the works.]

Washington, D.C.¬¬ – Rep. Nydia M. Velázquez (D-NY) has taken legislative action to grant legal status to prominent local immigrant rights advocate, Ravi Ragbir. Last year, after being taken into custody by Immigration and Customs Enforcement (ICE), Ragbir was ordered released by the Courts, following an outcry from elected officials, advocacy groups and others. Most recently, the 2nd Circuit Court ruled that Ragbir cannot be deported for now because it is possible ICE tried to silence his advocacy by deporting him.

Velázquez’s bill would grant Ragbir legal permanent status and, should he be deported, provide him a legal right to return to the United States. While the 2nd Circuit ruled in Ravi’s favor, he remains in jeopardy should courts rule against him in the future.

“Ravi Ragbir has been a pillar in our community and ICE’s efforts to deport him are cruel and immoral,” said Velázquez. “Not only am I concerned for Ravi from a humanitarian perspective, but ICE’s repeated targeting of him raises serious 1st Amendment concerns and fit a broader pattern of the agency unfairly pursuing those who speak out against the Trump Administration’s anti-immigrant policies.”

“I wish to thank Rep. Velázquez for introducing this bill because the immigration system is inhumane and we need to keep families together,” said Ragbir.

Separately, Velázquez has been a leader on immigration issues, authoring the American Promise Act, legislation that would prevent deportation of beneficiaries of Temporary Protected Status (TPS) and Deferred Enforced Departure (DED). That measure has been paired with other Democratic efforts to assist DREAMers and is expected to be considered in the House in the next several weeks.

Her legislation to assist Ragbir has been referred to the House Judiciary Committee for consideration.

END_OF_DOCUMENT_TOKEN_TO_BE_REPLACED

FOR RELEASE MARCH 7,2018
The Rutgers Law School International Human Rights Clinic filed an amicus brief on behalf of law scholars and human rights advocates in support of Ravi Ragbir, an immigrants’ rights activist who was recently released from detention after his abrupt and unconstitutional arrest by U.S. Immigration and Customs Enforcement (“ICE”). Mr. Ragbir is scheduled to be deported on March 15, 2018.

In its “friend of the court” amicus brief, the Rutgers Clinic argues that international law places great value on “political speech,” including criticizing United States immigration policy, and requires that Mr. Ragbir be allowed to speak without fear of retaliation. The Rutgers Clinic also argues that it is hypocritical for the U.S. to deport Ragbir for speaking about one of the country’s most important public policy issues, while simultaneously criticizing governments around the world for jailing advocates who speak publicly about the need for legal reform. In addition, the Clinic argues that Mr. Ragbir was targeted because of his prominent activism.

“This is a man who is a community leader and poses no threat to anyone. He advocates for legal reform in the most peaceful and constructive manner, and is well within his rights to do so,” said Professor Penny Venetis, Director of the Clinic. “International law protects immigrants in the United States from being retaliated against because of their political speech.”

Ragbir is the Executive Director of The New Sanctuary Coalition of NYC, an interfaith network of congregations, organizations, and individuals, who support people resisting detention and deportation. He is married to a Rutgers Law graduate Amy Gottlieb ’96, who is an associate regional director of American Friends Service Committee.

Eight Rutgers Law students from the Clinic contributed to the brief. The new hearing is scheduled for March 15, 2018.

END_OF_DOCUMENT_TOKEN_TO_BE_REPLACED 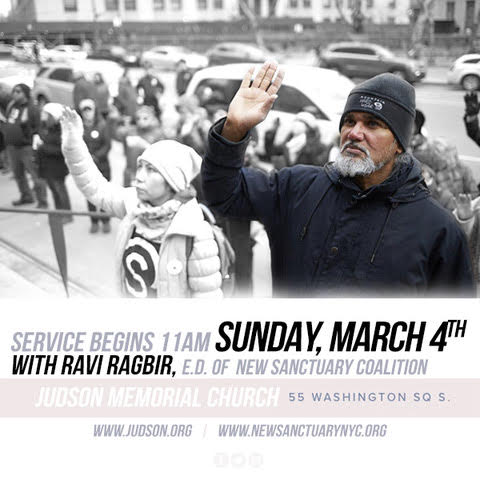 NEW YORK, NY: In anticipation of the upcoming hearing of his First Amendment case against Immigration and Customs Enforcement (ICE), Ravi Ragbir will give a sermon at Judson Memorial Church and lead a community action. The event will highlight the impact of the Supreme Court’s recent decision to allow indefinite detention (Jennings v. Rodriguez). END_OF_DOCUMENT_TOKEN_TO_BE_REPLACED

via Paula Chakravartty of the NYU Sanctuary Coalition:

We wanted to share with you some news from your neighbors at NYU. Having been inspired by the work that Ravi and  the New Sanctuary Coalition have been doing, we at the NYU’s Sanctuary Coalition are teaching an experimental collective course this semester on the history and politics of Migration and Sanctuary. The course is being taught by some 30+ faculty across many departments and schools in the university from the Law and Med School, to History, Literature, Politics and beyond. Alina Das was one of our first guest lecturers and we hope to have Ravi come and visit the class when his schedule frees up a bit. In the meantime, we wanted to share with you the progress of our course  in case it might be of use to the NSC movement and campaign, and its allies, in the form of political education. We have been putting up edited videos of our weekly lectures. Please do feel free to share and use. Your thoughts and feedback welcome. Contact us at nyusanctuary(at)protonmail.com

END_OF_DOCUMENT_TOKEN_TO_BE_REPLACED

Starting this week we will be posting a series of RaviGrams – images and audio from numerous supporters of Ravi, Jean and many others. The home for these RaviGrams is the new Instagram account @istandwithravi – follow us and share! 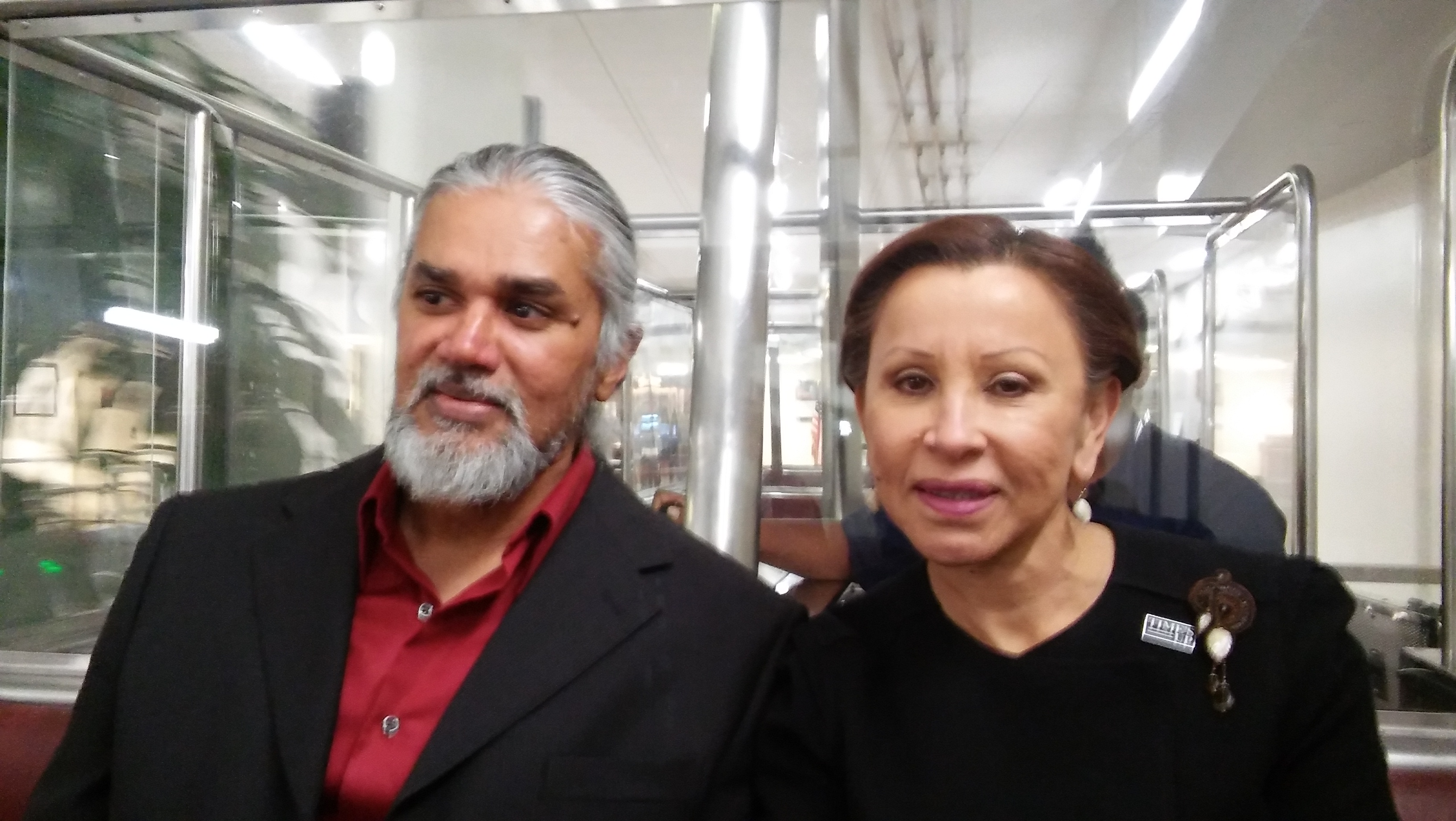 Ravi and Representative Nydia Velázquez on their way to the State of the Union in January 2018.

As you know, Ravi has received a temporary stay of his deportation for the next few weeks. However, we continue to fight for a permanent resolution that will allow Ravi to remain in the U.S. with his family and community.

On February 6th, Congresswoman Nydia Velázquez introduced H.R. 4937, a private bill in support of Ravi. If this bill is approved by Congress, it will restore Ravi to his permanent resident status. We recognize the difficulties of getting a bill through Congress but we believe that the power of community can make it possible!

Among the documents we must submit in support of the bill, we can list any “interested parties” who support Ravi & the passage of the bill. This is an opportunity to show Congress the widespread community support for Ravi – to tell them that they should pass the bill and stand up to ICE.

Fill out this form with your contact information and an explanation of why you support Ravi. Please fill out the form before Monday, February 19th at 8:00pm.

Once the bill is officially being reviewed by the Judiciary Committee, we will send information about contacting your electeds to support the bill!

If you have any questions, please contact Brittany at bcc366@nyu.edu.

Ravi’s Defense Committee
*As an “interested party”, your name, address, and phone number will be included in the supporting documents provided to the House Judiciary Committee.

THE COUNCIL OF THE CITY OF NEW YORK
OFFICE OF COUNCIL MEMBER
JUMAANE D. WILLIAMS

Resolution 0182, which can be read in its entirety online, calls on Congress to pass HR 4937, a private bill from Congresswoman Nydia Velasquez that would grant Ragbir legal permanent status, and in the case of his deportation, a legal right to return to the United States. END_OF_DOCUMENT_TOKEN_TO_BE_REPLACED