THE COUNCIL OF THE CITY OF NEW YORK
OFFICE OF COUNCIL MEMBER
JUMAANE D. WILLIAMS 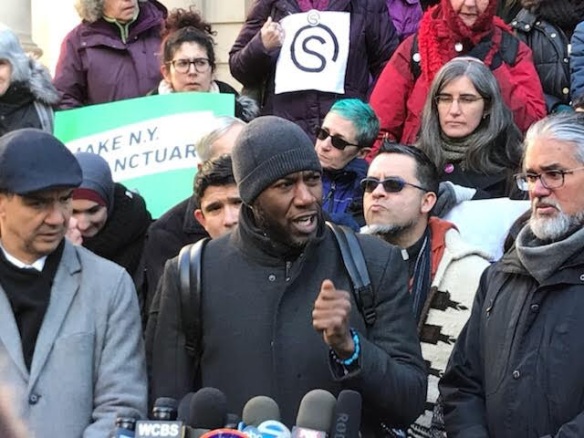 Resolution 0182, which can be read in its entirety online, calls on Congress to pass HR 4937, a private bill from Congresswoman Nydia Velasquez that would grant Ragbir legal permanent status, and in the case of his deportation, a legal right to return to the United States.

This is one of many efforts by the Council to advocate for Ravi to stay in the United States with his family and community he has built. On February 8th, the Black, Latino, and Asian Caucus, sent a letter to Thomas Decker, Director of the New York Field Office for DHS/ICE/ERO, citing his track record as a “dedicated community educator, spokesperson, and a person we have come to trust and respect as a partner in improving New York for all people, regardless of birthplace.” Other elected officials have come to Ravi’s defense as well, including Speaker Corey Johnson, Public Advocate Letitia James, Comptroller Scott Stringer, and Mayor Bill de Blasio, who sent his own letter to Director Decker urging that Ravi be allowed to remain in the United States.

Ravi Ragbir’s case has received national media attention with many advocates turning out DHS check-in dates and protesting in rallies for the reversal of his deportation order. Tensions escalated on January 11th, when Immigration and Customs Enforcement (ICE) detained Ragbir to start the removal process. Eighteen supporters, advocates, and community leaders were arrested by the New York Police Department, including Council Members Rodriguez and Williams.

Since then, Ragbir has been released from ICE detention and returned to his family, obtaining a stay on his deportation order through March 14th. Chair Donovan Richards held an oversight hearing in the Committee on Public Safety on February 7th regarding the NYPD’s practices related to protests, crowd control and response to situations where ICE may be involved or present.

“I stand with Ravi, and I’m heartened that the City Council stand with him as well,” said Council Member Jumaane Williams. “As Donald Trump and ICE aggressively target immigrants for immoral deportation, we in New York have a moral obligation to stand against this xenophobia– not just for Ravi Ragbir, but for the thousands of immigrants under threat who lack the widespread support that Ravi has rightly received. I thank Congresswoman Nydia Velasquez for taking federal action to protect Ravi, and my colleagues on the Council, including Council Member Ydanis Rodriguez and Chair of the Committee on Immigration, Council Member Carlos Menchaca, and Speaker Corey Johnson for taking up this cause with such conviction.”

“A vote in support of Ravi is a vote in support of the millions of all deportation vulnerable Americans who contribute billions of dollars to our economy,” said Council Member Ydanis Rodriguez. “It is a vote to uphold every person’s right to due process and to live in dignity. I proudly stand with Council Members Jumaane Williams and Carlos Menchaca in introducing this resolution, and call on Congress and the President to pass and sign HR 4937,”

” “As the Chair of the Committee on Immigration, I’m glad to see the outpour of support for one of New York’s most passionate immigrant rights leaders, Ravi Ragbir,” said Council Member Carlos Menchaca. “I support the bill introduced by U.S. Representative Nydia Velazquez which would allow Ravi to pursue lawful status and call upon Congress to pass this legislation. The coming together of grassroots organizations, the legal community, and Ravi’s friends and allies serves as a great example of what we can accomplish when we organize and mobilize together. Now it is time to do the same for those immigrants whose names and faces we don’t know and who, like Ravi, live in constant fear of being deported and separated from their families.”