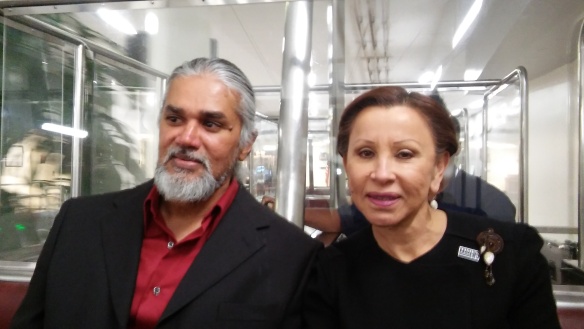 Ravi and Representative Nydia Velázquez on their way to the State of the Union in January 2018.

As you know, Ravi has received a temporary stay of his deportation for the next few weeks. However, we continue to fight for a permanent resolution that will allow Ravi to remain in the U.S. with his family and community.

On February 6th, Congresswoman Nydia Velázquez introduced H.R. 4937, a private bill in support of Ravi. If this bill is approved by Congress, it will restore Ravi to his permanent resident status. We recognize the difficulties of getting a bill through Congress but we believe that the power of community can make it possible!

Among the documents we must submit in support of the bill, we can list any “interested parties” who support Ravi & the passage of the bill. This is an opportunity to show Congress the widespread community support for Ravi – to tell them that they should pass the bill and stand up to ICE.

Fill out this form with your contact information and an explanation of why you support Ravi. Please fill out the form before Monday, February 19th at 8:00pm.

Once the bill is officially being reviewed by the Judiciary Committee, we will send information about contacting your electeds to support the bill!

If you have any questions, please contact Brittany at bcc366@nyu.edu.

Ravi’s Defense Committee
*As an “interested party”, your name, address, and phone number will be included in the supporting documents provided to the House Judiciary Committee.

Washington, D.C. — Congresswoman Nydia Velázquez (D-N.Y.) today introduced H.R. 4937, a private immigration bill, on the floor of the House of Representatives. If signed into law, H.R. 4937 would provide Ravidath “Ravi” Ragbir, a nationally recognized immigrant rights leader who faces imminent deportation, with an avenue to permanent immigration status. Should ICE deport Mr. Ragbir, which could happen as early as Saturday, February 10, H.R. 4937 would still have effect and provide Mr. Ragbir with a right of return.

Mr. Ragbir, Executive Director of the New Sanctuary Coalition of New York City, was detained on January 11, 2018, at a routine ICE check-in in New York City. His detention was part of what growing numbers of elected officials, faith leaders, and community organizations are calling a surge of retaliation by ICE against outspoken immigrant rights activists who are vulnerable to deportation. Mr. Ragbir’s legal team from the Immigrant Rights Clinic at NYU School of Law won his release from detention on January 29, 2018, only to learn that ICE was ordering Mr. Ragbir to report for deportation on February 10.

“The outrage after Ravi’s detention by ICE is a testament to his status as a community pillar,” noted Congresswoman Velázquez.  “Ravi has dedicated himself to helping others and poses no threat to anyone, making threats to deport him nonsensical and inhumane. My bill puts our community’s support into legislative action. If enacted, it would allow Ravi to stay in the U.S. and, should he be removed, establishes a legal mechanism for him to return.”

“In addition to providing a potential legislative remedy for Ravi’s supporters to rally around, this bill will also send a signal to ICE and the Courts that Ravi enjoys strong support among the community and elected officials at all levels of government,” said Velázquez. “It is my hope that the Courts and ICE do the humane right thing by Ravi and this legislation sends them the message that we stand in solidarity with Ravi.”

Mr. Ragbir welcomes the introduction of H.R. 4937, while recognizing that his fight is far from over. “I cannot fully express the gratitude I feel to Congresswoman Velázquez, for taking a stand against ICE’s efforts to target those standing up for the rights of immigrants. In the absence of just and humane immigration reform, I hope that bills like this will be signed into law to recognize the contributions that immigrants make to this nation. In the meantime, I will continue to organize for all families who face the threat of exile due to this inhumane system.”

Kaji Douša, Co-Chair of the New Sanctuary Coalition Board and Senior Minister, Park Avenue Christian Church, said, “On February 10, ICE intends to exile one of the nation’s most outspoken immigrant leaders, Ravi Ragbir. We commend the action taken by Congresswoman Velázquez and we will continue to work hard to protect Ravi and so many others like him to show ICE that they can try to deport our leaders, but they will never deport the movement.”

Mr. Ragbir has been ordered to present himself for deportation on Saturday, February 10.