(New York, NY) On Thursday, October 25, the New Sanctuary Coalition and NYU Immigrant Rights Clinic will hold a teach-in about the First Amendment rights of immigrants who speak out against the injustices and inhumanity of our immigration system.

Hosted at a Brooklyn church founded as a “temple of abolition” against slavery, the teach-in will be held in anticipation of an upcoming First Amendment case, Ragbir v. Homan, that will be heard in the Circuit Court of Appeals for the Second Circuit early next week. The plaintiffs of Ragbir v. Homan seek, among other things, a court order restraining the government from deporting and otherwise targeting immigrant activists based on their protected political speech.

Thursday’s teach-in will unpack immigrants’ constitutional right to free speech, even as the government lashes out against immigrant rights leaders and activists.

Who: Speakers will include Congresswoman Yvette Clarke; Rev. Kaji Douša, Senior Pastor at The Park Avenue Christian Church; Ravi Ragbir, Executive Director of New Sanctuary Coalition; Ramya Krishnan, Staff Attorney at The Knight First Amendment Institute at Columbia University; and William Perdue, Associate at Arnold & Porter. The teach-in will be followed by a Know Your Rights training for activists and public art program.

What: A First Amendment Teach-in, held in anticipation of a court hearing  about whether the government can retaliate by detaining and deporting people who speak out against immigration policies.

Where: Lafayette Avenue Presbyterian Church, a church founded as a temple of abolition in the 1850’s. 85 S. Oxford St, Brooklyn, NY 11217

Immigrant rights are under attack. How does the First Amendment protect immigrants who speak out against the injustice of the deportation system? How do we ensure that we protect the rights of all of our community members when we make our voices heard? Join us at Lafayette Avenue Presbyterian Church, a church founded as a temple of abolition in the 1850s, to learn about these issues and an upcoming First Amendment case, Ragbir v. Homan, that will be heard in federal court later this month.

The teach-in will be followed by a Know Your Rights training for activists and a public art project. This event is sponsored by the New Sanctuary Coalition and NYU Immigrant Rights Clinic. Co-sponsors include NYU Sanctuary Coalition, Law@theMargins, and Jaime Lucero Mexican Studies Institute at The City University of New York Lehman College.

On Friday, October 5, 2018, Ravi and immigrants’ rights organizations (the “Appellants”) filed their reply brief in Ragbir et al., v. Homan et al. The brief—which outlines the outrageous and unlawful targeting of Mr. Ragbir and other immigrant rights’ activists in retaliation for their vocal opposition to our broken immigration system—was filed in anticipation of oral argument which is schedule for Monday, October 29, 2018 at 10:00am before the U.S. Court of Appeals for the Second Circuit. Community members are encouraged to attend.

In addition, and preceding oral argument, the NYU School of Law Immigrant Rights Clinic and Mr. Ragbir’s Defense Committee, will be hosting a First Amendment Teach-In entitled, Whose Speech? Our Speech! Immigrant Rights and the First Amendment, in anticipation of oral argument on Thursday, October 25, 2018 from 6pm – 8pm. The teach-in will be held at Lafayette Avenue Presbyterian Church in Brooklyn, New York, a church founded as a temple of abolition in the 1850s, which served as a stop on the Underground Railroad. Details and speaker bios forthcoming.

The lawsuit before the U.S. Court of Appeals for the Second Circuit seeks a preliminary and permanent injunction restraining the government from taking further action to effectuate a deportation order against Mr. Ragbir, the Executive Director of the New Sanctuary Coalition and an outspoken advocate for immigrants’ and human rights.

There remains a case pending before the Federal District Court for the Southern District of New York, which also seeks a preliminary and permanent injunction restraining the government from selectively enforcing immigration laws against individuals based on protected political speech.

Rutgers Law School International Human Rights Clinic filed an amicus brief on behalf of Emilio and Oscar Gutiérrez-Soto, political asylum seekers detained for nine months by ICE, and released only after a federal court in Texas found sufficient “temporal proximity” between amici’s political speech and ICE’s detention and attempted deportation of them.

In addition, First Amendment scholars at the Institute for Constitutional Advocacy and Protection at Georgetown University Law Center, the Knight First Amendment Institute at Columbia University and the Roderick & Solange MacArthur Justice Center filed an amicus brief arguing that the use of deportation as a retaliatory tool against nonviolent activists, like Mr. Ragbir, is outrageous and the kind of conduct that the U.S. typically condemns.

Oral argument in the case has been set in the Second Circuit, located at 40 Foley Square, for October 29, 2018. Plaintiffs encourage members of the community to attend. For more information and updates, please visit istandwithravi.org.

Ravi had been scheduled to report to ICE on September 7th. His report date has been postponed until October 12th at 10:00 a.m. Please mark this date on your calendars.

In the meantime, we are continuing to fight against ICE’s cruel and unjust practices. In the lawsuit challenging ICE’s retaliation against Ravi and other activists, Ravi and several immigrant rights organizations filed their opening brief to the Court of Appeals for the Second Circuit arguing why the federal court should restrain ICE from retaliatory enforcement against Ravi for engaging in political speech critical to American democracy.

We anticipate that a hearing in this case will be scheduled in the near future, and will update you accordingly.

While we continue our fight in the courts, we know that it is the power of community support that will keep Ravi here and shed light on the injustice of ICE’s efforts to detain and deport people in darkness.

We urge you to stay vigilant, and will be in touch shortly with upcoming actions to support Ravi and others.

In the meantime, please also save the date for the New Sanctuary Gala, to be held on Thursday, November 8, 2018. Get your tickets here. 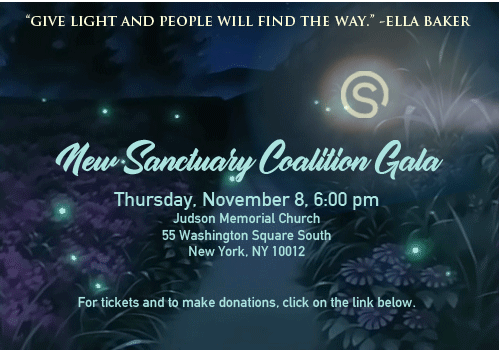 On Friday, August 31, 2018, Ravi and immigrant rights organizations (the “Appellants”) filed the opening brief in Ragbir et al., v. Homan et al., the First Amendment lawsuit now before the Court of Appeals for the Second Circuit. In the brief, Appellants argue that the federal district court hearing the case wrongly denied their request for a preliminary injunction, which asked the federal court to restrain ICE from deporting Ravi in retaliation for his exercise of his First Amendment rights.
The brief highlights the escalation of ICE’s retaliatory tactics–denying New Sanctuary Coalition’s access to public spaces, surveilling its headquarters, abruptly arresting and deporting one of its co-founders, and arresting and attempting to deport Ravi himself. It also highlights First Amendment retaliation against immigrant rights leaders throughout the country. Briefing in the case will end in early October and the parties anticipate oral argument in the case shortly thereafter.
Link to Filing: https://ravidefense.files.wordpress.com/2018/09/merits-brief-as-file-on-08-31-2018.pdf

William Perdue of Arnold & Porter deftly argued before a packed courthouse that Ravi and the New Sanctuary Coalition should receive a stay of deportation. Perdue stated that there is strong evidence that the government retaliated against Ravi because he has been outspoken about the injustices of our current immigration system and he, the New Sanctuary Coalition, and the community have exposed ICE’s cruel and unjust practices.

At the end of the hearing, over a hundred supporters of Ravi and the First Amendment held a press conference and rally in Foley Square, which culminated in a recitation of the First Amendment in English and Spanish, led by Ravi and renowned immigrant and reproductive rights activist, Alejandra Pablos.

The Court also decided to expedite the plaintiffs’ appeal and stated that it will schedule oral argument in the case.

Please be on the lookout for an oral argument date in the coming months.

Currently, Ravi is scheduled to report to ICE for deportation on September 7, 2018. However, because there is a stay of deportation currently in place, that report date may be rescheduled. But we will always be prepared. Please look out for updates & information about actions on September 7th.

Thank you for all of your continued support as we stand up on behalf of the First Amendment rights of all our community members. We are truly grateful.

New York, NY: The U.S. Court of Appeals for the Second Circuit will hear oral arguments in Ragbir v. Homan, a First Amendment lawsuit filed against Immigration and Customs Enforcement (ICE) for its use of deportation and enforcement measures to “disappear” or silence its critics, namely directly-affected immigrant leaders who speak out against the agency’s policies and the deportation machine. The lawsuit was filed by nationally recognized immigrant rights activist Ravi Ragbir, along with immigrant rights organizations New Sanctuary Coalition, CASA, Detention Watch Network, National Immigration Project of the National Lawyers Guild, and the New York Immigration Coalition (the “plaintiffs”).

Ragbir v. Homan challenges the unlawful targeting of immigrant rights activists who have spoken out against the federal government’s immigration policies. As part of that lawsuit, plaintiffs sought a “stay of removal” for Ravi Ragbir, Executive Director of the New Sanctuary Coalition , who was abruptly targeted for deportation in January 2018 a decade after he was given an order of supervision to live and work in the U.S.  Mr. Ragbir is one of many outspoken immigrant rights leaders who has been similarly targeted nationwide. A district court denied the plaintiffs the initial protections they sought, including a stay for Mr. Ragbir, concluding that it did not have the power to review the government’s actions. The plaintiffs appealed and now seek a motion for a stay of Mr. Ragbir’s removal from the appellate court.

Community members are invited to listen and observe the plaintiffs’ co-counsel, Arnold & Porter, argue before the Second Circuit why the Court should grant Mr. Ragbir a stay of deportation until ICE can prove that its attempt to deport Mr. Ragbir was not in retaliation for his free speech.

On Wednesday, May 23rd, the Honorable Kevin Castel of the Federal District Court of the Southern District of New York denied Mr. Ragbir and others’ request for a preliminary and permanent injunction to prevent ICE from deporting Mr. Ragbir unless ICE could demonstrate that its actions were untainted by unlawful retaliation against Mr. Ragbir for exercising his First Amendment Rights to speak out against the injustices of our immigration system. Judge Castel’s ruling does not foreclose Mr. Ragbir and plaintiff organizations’ additional claims, which aim to vindicate the rights of immigrants who have been targeted by ICE on the basis of their protected speech regarding U.S. immigration law and policy. Judge Castel issued his ruling despite six amici briefs—including from faith leaders, several immigrant rights organizations, and local, state and federal elected officials–detailing the chilling effect that ICE’s targeting of immigrant activists has had on communities nationwide. Plaintiffs intend to appeal Judge Castel’s decision.

Ravi continues to have a stay of deportation pending the outcome of his case in the district court for the Federal District of New Jersey, where he seeks to vacate the underlying conviction which serves as the basis for his removal order because of fundamental errors that occurred during the original proceeding.